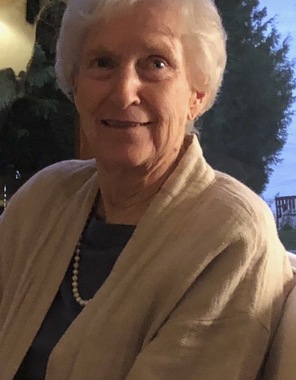 Back to Alice's story

Alice Belle Johnson Thornton was born in Wilbraham, Massachusetts on Aug. 24, 1928 to Doris Belle Tilton Johnson and Roy Johnson. She passed on at age 91 on Jan. 4, 2020 surrounded by her seven children in Suttons Bay.
Alice had a life well lived. She was raised in Wethersfield, Connecticut with her parents and 3 brothers, Newell, Roy and Ken. In high school, she was a proud and lifelong member of the Bow Girls. She spent her summers at Hampton Beach at the family cottage.
Throughout her life Alice was a member of the Congregational Church. After High School, she made her way to LaSalle College, University of Connecticut and finally Indiana University where she completed her Dietetic Internship. During her college years, she became a lifelong member of Kappa Kappa Gamma sorority.
At Indiana University, she met her soon to be husband, Robert H. Thornton (Bob), whom she married in Wethersfield, Connecticut in 1951, and then moved to Michigan and started a family. She and Bob had twins, Caryl and Caryn and then followed with Tom, and Jeanne. During those years she was busy with Cub Scouts, Brownies/Girl Scouts, cooking and taking care of the family.
A few years later, Alice and Bob moved to Chelsea and rounded out their family of seven with Gary, Cinda and Alison. With all those children Alice kept busy taking care of them, and still did activities with her kids including Indian Maidens and 4H Sewing club.
While living in Chelsea, Alice was also active in the Ann Arbor Women's City Club, Chelsea Community Hospital Auxiliary, Waterloo Historical Society, and Inverness Country Club.
Alice also worked outside the home as Kitchen Supervisor and then Wedding Coordinator at the Michigan League for 10 years in the 1980s.
Once she and Bob retired, they headed south to Naples, Florida where they lived for 15 years. In Naples, she loved gardening, and was a member of PEO and the Naples Garden Club.
Once they decided to live closer to family, Alice and Bob moved to West Seattle. While she was in West Seattle, she was a member of the West Seattle Art Club and The Garden Club. Bob passed in 2013, and Alice decided to move back to Michigan to Traverse City. She became a member of PEO once again, and lived at Glen Eagle Retirement Home in Traverse City and the Toy House in Suttons Bay until her passing.
Alice always made time for her favorite pastimes. She re-decorated 10 houses. She was an avid flower lover (especially ladyslippers) and gardener, a vegetable gardener. She loved art, sewing, knitting and cooking. She played golf and bridge and she made Christmas special with homemade candy houses.
Her love of the world led her on many travels. With Bob, they travelled to China, Morocco, Spain, Portugal, Czechoslovakia, Malaysia, Cozumel and more. She also hiked the Himalayas in Nepal in her mid-60s.
Alice is survived by her seven children, Caryl Sherpa, Caryn (Denny) Rogers, Tom (Cheryl) Thornton, Jeanne (Ken) Hunter, Gary (Linda) Thornton, Cinda (Chuck) Voutselas, Alison Thornton; and 12 grandchildren; and six great-grandchildren. Alice is also survived by her brother, Ken Johnson, and her cousins, Richard McCarthy and Bobby McCarthy.
Since Alice was a lover of ladyslippers, please make any memorial donations to the Leelanau Conservancy, 105 N. First St. Leland, MI 49654 or www.leelanauconservancy.org/donate/ in her name.
Published on January 14, 2020
To send flowers to the family of Alice Belle Johnson Thornton, please visit Tribute Store.

Send flowers
in memory of Alice

A place to share condolences and memories.
The guestbook expires on April 12, 2020.