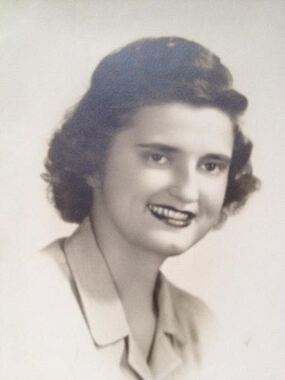 Back to Ann's story

Ann Louise (Burek) Simmons, 95, formerly of Traverse City, passed away on Dec. 6, 2019 at The Fountains in Kalamazoo after a long journey with dementia. Ann was born in Petoskey on April 19, 1924 the youngest of nine children to Joseph and Antonette Burek.
She was married to William Simmons in February 1950; he preceded her in death in 2003. All eight brothers and sisters and her son, William R. Simmons, also preceded Ann in death.
What would Ann want you to know about her death? She would say something similar to what Billy Graham said before his death, "You may have come here today because you heard that Ann has died. Don't you believe a word of it! She is more alive now than she ever was on Earth. She has just changed her address. She has been welcomed into the presence of her savior and has met him face to face."
She is survived by her daughter, Carole Ann, of Richland; her granddaughter, Caitlin, of Arlington, Virginia; and grandson, Andrew, of Omaha, Nebraska. She is also survived by numerous nieces and nephews, whom she loved dearly.
Ann had great affinity for the Traverse City farmers market and the longstanding friendships she made attending the market. Through the spring to fall seasons, she would be hard-pressed to miss a single market, buying fresh produce and talking with friends she had made over the many years. Ann's daughter and grandchildren affectionately keep that tradition every time they're in Traverse City!
Ann was also an avid gardener and had people often stopping to admire her beautiful gardens. Her baking skill was unmatchable, and you could always count on many sweet treats during the holidays ... especially her cookies and pies!
Ann loved family more than anything, and her grandchildren were the apple of her eye. She attended many concerts, sporting events, dance recitals and graduations and was so proud of their accomplishments. She was so proud of the young adults that they have become.
A memorial service will take place on Dec. 20 at 11 a.m., with visitation one hour prior, at the Reynolds Jonkhoff Funeral Home. Ann's final resting place will be with her husband at Sunset Hill Cemetery in East Jordan.
A continuation of the celebration for Ann's life will take place in the spring of 2020 by the family. Notifications will be made in early spring.
In lieu of flowers, contributions may be made to the Father Fred Foundation in Ann's memory.
Kindly share a memory with the family at www.reynolds-jonkhoff.com.
The family is being cared for by the Reynolds Jonkhoff Funeral Home and Cremation Services.
Published on December 13, 2019
To plant a tree in memory of Ann L. Simmons, please visit Tribute Store.

Plant a tree in memory
of Ann

A place to share condolences and memories.
The guestbook expires on March 11, 2020.

Barbara Johnson
I’m so sorry for your lost. Ann was a very special friend. We spent 15 years greeting each other and sharing our fruit purchases . At the Farm Market. I worked for Barker Creek Nurcery. And also stopped over to visit as she was making cookies and having her basement finished correctly. She was a very patient lady
View all