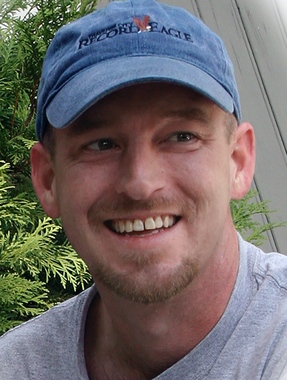 Back to David's story

David Arthur Johnson, 51, of Traverse City, died Nov. 24, 2019.
David was born in Ann Arbor on Aug. 7, 1968 the youngest child of Dr. Henry "Hank" and Susan (Schubert) Johnson. The family moved to Traverse City, their hometown, soon after. David grew up on Sixth Street with his three siblings, Steven, Karen and Mary.
David attended Traverse City Central High School, where he was an outstanding member of the diving team. He earned his Eagle rank from the Boy Scouts with a project building wooden walkways along the Boardman River. He was also tapped for Order of the Arrow. Scouting was an important part of life for David, a family tradition he shared with his son, father, grandfather and several uncles and cousins. David served as his son's Scoutmaster for Cub Scout Pack 35 of Traverse City.
After a year of college at Michigan Tech and a brief thought of joining the military - another family tradition - David joined the International Brotherhood of Electrical Workers Local 498 in Traverse City. He loved being a "sparky" and hoped to become a master electrician and open his business one day. An early adopter of home automation systems, he worked for several firms in the area during his career.
David had many interests - he loved nature, photography, flying planes, scuba diving, camping and hiking and enjoyed sharing these pastimes with the people he loved.
David was proud of his family, especially his children, Annika Grace Leary (mother, Nina Leary), of Traverse City; and Arthur Lazlo Johnson (mother and former wife of David, Alison Widmer), of Clearwater Township.
He is also survived by his mother, Susan Johnson, of Traverse City; three siblings, Steven Johnson, of Grawn, Karen (Dag) Jorstad, of Williamsburg, Virginia, and Mary (James) Pittel, of Auburn Hills; seven nieces and nephews, Jennifer Braman and Christopher Johnson, Anna and Erik Jorstad, and Elizabeth, James Jr. and Caroline Pittel. He is also survived by many aunts, uncles and cousins.
David was preceded in death by his father, Dr. Henry "Hank" Johnson; uncles, Col. Harold "Red" Johnson and Arthur Schubert; and his beloved dog, Terra.
Private family funeral services have been held.
Memorial contributions may be made in David's name to the Michigan Crossroads Council Boy Scouts of America or to the charity of one's choice.
Kindly visit David's tribute page at www.reynolds-jonkhoff.com to share a memory or condolences.
Published on December 8, 2019
To plant a tree in memory of David A. Johnson, please visit Tribute Store.

Plant a tree in memory
of David

A place to share condolences and memories.
The guestbook expires on March 05, 2020.

Sue Welton
Dave and I became friend at Michigan Tech and had lots of adventures. I met his kids a while back and bummed I didn't keep in contact. He is a wonderful friend and kind spirit. I am so sad to hear of his passing :( .... Hugs, prayers and love to his children and family.
Randy willard
Best to David's family. I havent seen him in 30 years but it was still sad to learn he passed. I fondly recall him as friend
Bill Howard
I haven't seen David in a number of years but still have very fond memories of the Scout activities and camping trips with David and very supporting father Hank. It is great that he continued on as a Scouting leader.
Memorable also was when David, Peter Benner and my son Scott (all in early teens) ask me to take them to the State Theater. I knew something was amiss as they all smiled when I was required to sign them in. A few minutes into the show I realized it was "R" rated. They responded quickly as I beckoned them to leave!
View all