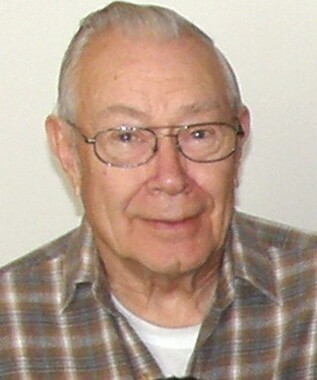 Back to Henry's story

Henry "Hank" Edward Ennis, 89, northwest Michigan native, passed away Wednesday afternoon, Jan. 8, 2020 at MediLodge of GTC with his children and family at his side.
Born in Northport on Dec. 6, 1930, he was the son of the late John and Alice (Larson) Ennis. Hank spent his childhood in Northport working on the family farm.
He enlisted in the United States Navy and was a radarman during the Korean War on the USS R. B. Anderson.
On Oct. 19, 1957 he married Betty (Sleder) Ennis, of Traverse City. She preceded him in death on Sept. 9, 2016.
He spent a majority of his working life at Acme TV, where he eventually became the owner.
Hank enjoyed spending time with family and friends, fixing anything mechanical and spending time outdoors. He especially enjoyed repairing old snow blowers and lawn mowers after he retired. He was an avid Detroit Tigers and Lions fan and enjoyed playing euchre.
He is survived by his children, John (Anita) Ennis, of Empire, and Katherine (Scott) Gerber, of Columbus, Ohio; grandchildren, Kristen (Ennis) Harris, Joe Ennis, Bryant Ennis, Kyle Gerber and Lauren Gerber; seven great-grandchildren; and his sisters, Marie Thomas and Lillian Gilmer.
In addition to his parents, he was preceded in death by his brothers, Clifford Ennis and John George Ennis (during infancy).
At his request, he will be cremated and buried at Oakwood Cemetery. A private family service will be scheduled for a later date.
In remembrance of Hank, donations may be made to the National Institute of Neurological Disorders and Stroke or to the charity of one's choice.
Kindly share memories with the family at their online guest book on Covell Funeral Home's website.
Arrangements are being handled by Covell Funeral Home of Traverse City.
Published on January 12, 2020
To send flowers to the family of Henry Edward Ennis, please visit Tribute Store.

Send flowers
in memory of Henry

A place to share condolences and memories.
The guestbook expires on April 09, 2020.

Rick Johnston
I remember Mr Ennis from the neighborhood as a kid. A very kind and quiet man. He was a great father and family man.

I am sure he will be missed by his family and friends.
View all