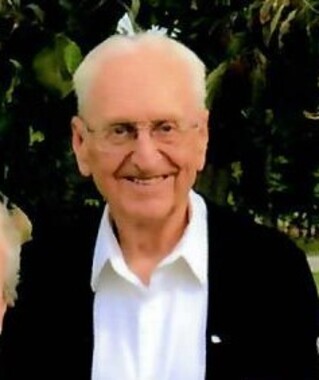 Back to John's story

John Nevius Marshall, 87, of Benzonia, died on Feb. 1, 2020, at Munson Medical Center in Traverse City.
John was a native son of Benzie County as both his Marshall and Nevius families came here in the County's early days.
Born in Beulah on Oct. 1, 1932, to John Edward and Pearl (Nevius) Marshall, John graduated from Benzonia High School in 1951 and from Michigan State University in 1955. He then served in Korea as Lieutenant of Infantry and Company Commander.
Following his Army discharge, John spent two years doing personnel work in Chicago before joining his father in the John Marshall Insurance Agency in Beulah in 1959, from which he retired in 1988.
John was married to Jane Preston of St. Joseph from June 1955 until her death in 1987. He then married his Benzonia High School classmate, Doris (Stewart) Dieckman, who survives him, in September 1988.
Besides his first wife, John was preceded in death by both of his parents and his sister, Marcia Sinclair.
In addition to Doris, John is survived by sons, John P. (Connie) Marshall, of Rockford, and Neil (Shelley) Marshall ,of Ludington;, his daughter, Laura (Nick) Kassanos, of Pentwater; his step-daughters, Debra Dieckman, of Greenville, and Diana (Mark) Iverson, of Grand Rapids; grandchildren, Courtney (Joshua Crocker) Marshall ,of Traverse City, Thomas (Kasey) Marshall ,of Wyoming, Meghan Marshall, of Canton, Preston (Karely Byrd) Nowsch, of Ypsilanti, Molly Marshall, of Grand Rapids, and Nathan Nowsch, of Lansing; one precious great-granddaughter, Sophia Marguerite Crocker, of Traverse City; and two nieces, Paula (Dan) Rahenkamp, of Tampa, Florida, and Melanie Winans of Santa Fe, New Mexico.
John was a member of Benzonia Congregational Church and a long-time volunteer at Paul Oliver Memorial Hospital. He was also a founding member of the Benzie Community Chorus and served for many years as a Kiwanis member.
Cremation has taken place at the Benzie Area Crematory. A memorial service for John will be held at Benzonia Congregational Church at 2 p.m. Saturday, March 7, 2020. Memorial contributions may be made to the Benzonia Congregational Church.
The Bennett-Barz Funeral Home, in Beulah is handling arrangements.
Published on February 13, 2020
To send flowers to the family of John N. Marshall, please visit Tribute Store.

Send flowers
in memory of John

A place to share condolences and memories.
The guestbook expires on May 12, 2020.