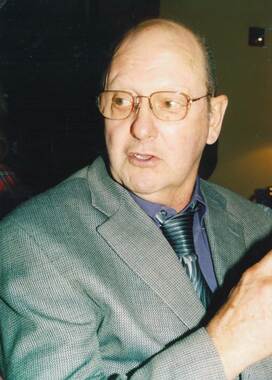 Kyran "Hardwood" John Gilland, 83, of Lake Leelanau, passed away Thursday, Dec. 19, 2019 at home while surrounded by his loving family and animals.
Kyran was born Aug. 9, 1936 in Lake Leelanau the son of James and Julia (Horton) Gilland. On April 7, 1957 in Muskegon he married Lenora Mae (Botruff) Gilland, who preceded him in death on Nov. 7, 2018.
Kyran was a loving dad and doting grandfather who was gracious to a fault. He would help anyone in need, whether it be with money or a helping hand. Kyran could not drive by someone on the side of the road who needed help.
He was an avid hunter and fisherman. If you stopped by his house, Kyran would proudly show you his pond stocked with fish. He passed this love of the outdoors to his kids and grandkids. Kyran taught his kids and grandkids how to hunt, fish, work on a car, drive a boat on the big lake or drive a tractor. He especially bonded with his special buddy, Alex, and the two became peas in a pod together.
Kyran enjoyed listening to country music from the '60s. He also enjoyed Spartan and Michigan basketball and watching the Detroit Tigers with his wife, Lenora.
Kyran worked up until he was 81, driving truck for Lake Michigan Hardwood, Grand Traverse Trucking, Mikowski's and Leelanau Fruit; he was known by his CB handle of Hardwood John.
He comforted those who might be down and was a fountain of love for his family.
Kyran is survived by his children, Terry (Sandra) Gilland, Janet Schneider, Melinda Gilland; an "adopted daughter," Jane Lang; a sister, Irene Hoffman; eight grandchildren, Kimberly, Ryan, Justin, Kirsten, Tiffany, Alex, Travis and C.J.; and six great grandchildren, Arloa, Hunter, Bentley, Aubrey, Johnny, Ben and Mae; and two daughters-in-law, Jan and Toni.
He was preceded in death by his parents; his loving wife of 61 years, Lenora; two sons, Jimmy and David Gilland; and 10 siblings.
A celebration of Kyran's life will be held from 3 to 7 p.m. on Saturday, Jan. 11, at the VI Grill of Suttons Bay.
Memorials may be directed to Traverse Bay Children's Advocacy Center, 2000 Chartwell Dr., Suite 3, Traverse City, MI 49696.
Please share condolences with Kyran's family at www.martinson.info.
Arrangements are with the Martinson Funeral Home and Cremation Services of Leelanau.
Published on December 28, 2019
To plant a tree in memory of Kyran J. Gilland, please visit Tribute Store.

Plant a tree in memory
of Kyran

A place to share condolences and memories.
The guestbook expires on March 26, 2020.

Restore the guestbook to view the 4 more posts by family and friends, and share a memory or message of condolence of your own.