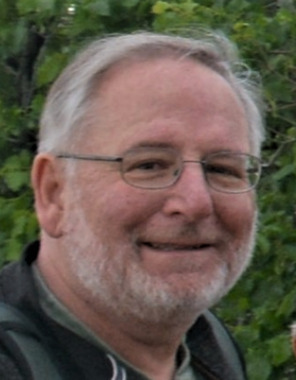 Back to Robert's story

Robert R. "Bob" Hanson Jr., 70, of Traverse City, passed away Feb. 4, 2020.
Bob was born Sept. 26, 1949 in Manistee. Bob spent most of his early years in Detroit and attended St. Martin High School. He later received a degree from Henry Ford Community College.
Bob moved to Traverse City after marrying Marley Navin in 1971. Bob's career in computer technology led to his co-founding Nugen Systems, supporting integrated library systems across northern Michigan.
Bob and his lifelong friend, Ken Keusch, loved helping people. In their spare time they assisted with many home building projects. The two even built Bob's home in Suttons Bay. Bob loved the outdoors and enjoyed camping, canoeing, fishing and hiking. In 2002, he married Marlas Wyckoff. After retirement, Bob enjoyed volunteering at Munson Manor.
Bob was preceded in death by his parents, Mary Longhini Hanson and Robert Hanson, Sr.; and his younger sister, Elizabeth "Betty" Pilon (Rob). In addition to his wife, Marlas, Bob leaves behind his daughter, Carrie Hanson-Powell (Jonah); sister Roberta Hanson (Frank); step-children, David Speas (Melissa) and Karen Wyckoff (Erin).
There will be a memorial service in the spring.
Published on February 15, 2020
To send flowers to the family of Robert R. Hanson, please visit Tribute Store.

Send flowers
in memory of Robert

John & Karen Wells
We are so sorry for your loss. Bob was both talented and generous with his time. We are grateful for his fine work for South Fox, building window sash from scratch, rebuilding the historic shutters and more. It was fun getting to know him over projects and lasagna. Rick Greenup
Bob was a great guy, always smiling and a friend to all. So sorry to hear of his passing . Bob will be missed but never forgotten. Thoughts and prayers to all of your family.
Sue & Jon Wyckoff
Hi Marley,
So sorry to hear of Bob's passing..Thoughts are with you and all his family.
Ron La Charite
Bob was an easy going nice guy who was fun to hang out with in our group going to dances and out to eat later. Bob will be missed by everyone our prayers go out to him and his family
Doug Meteyer
Bob was a kind and gentle man who cared about others. The world was a better place for Bob having been here. Rest in peace, friend.
charles m. gelardi
bob was a special friend during our high school years,,i will be praying for him and his family,,,
Rick Greenup
So sorry to hear of the passing of Bob. Thoughts and prayers to all of your family. Bob was a kind giving person who was liked by everyone. His smile and sense of humor will always be remembered. Bob will be missed but never forgotten. Class of 68
Chuck Neumeyer
So sorry to hear. My prayers go out to his family. RIP Bob
Mary Bathje
Bob was an awesome down to earth guy, I waited on him at olesons, he sure will be missed!! Rip bob!!!
View all