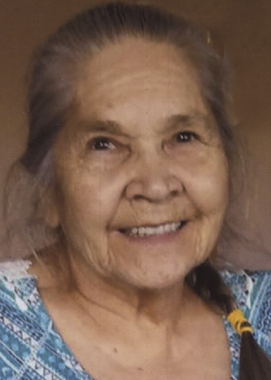 Back to Ruby's story

Ruby Ogemagegedo went home to be with the Lord Jan. 25, 2020. Ruby was born Sept. 30, 1935 in Northport to Anna (Jake) and Joseph Ogemagegedo.
Ruby lived her life in the faith of God and love of family and community. From a young age she was known for her kind and helpful nature, first as a help to her mother, one of her most joyful memories that she reflected on often, and later with elders in the community, visiting and helping with chores where she could.
Her love of community led her to serve on the first Tribal Council of the Grand Traverse Band of Ottawa and Chippewa Indians, of which she is a member. She worked diligently for eight years, alongside the other councilors, to lay the foundation, constitution and restoration of the people of the Great Lakes. She was proud of this accomplishment in her life and what it would mean to future generations.
Ruby was a strong woman who raised seven children as a single mother; she was not rich, but showed through example how to live a rich life by the way you treated people, by the kindness you were able to extend to others and through never letting adversity turn you from your responsibilities.
One of her greatest joys were her grandchildren; she was a constant in their lives, encouraging them, loving them and sharing a love of God that has built a family foundation that is strong in the knowledge that she now rests with God and it is our responsibility to carry her legacy of love and kindness forward.
Ruby was an active member of the Northport Indian Mission Church, where she began teaching Sunday school under Amos Kahgee and was active in all areas of the church, including the Kewadin Indian Mission Church.
Ruby was trained in culinary arts and worked in various positions relating to this field, including often working as the cook at the Northport Indian Mission and the Kewadin Indian Mission Camp meetings. She enjoyed the work, the fellowship and she loved to be busy!
Slowing down in her later years was a little difficult for her because she was a lady always on the go; however, she was able to rely on her TBN programming and her beloved dogs to keep her occupied.
To carry on her memory are Ruby's five daughters, Cindi (Ed) John, Robin and Brenda Perry, Anna (Len) Miller and Jesse Ward (José Barrientoz); her grandchildren, Jennifer (James) Lawson, Danielle Paul, Desire, Alex (Kayla)and Cameron (Kenzie) Schocko, Anthony, Daniel (Emily), Rachel (James) and Christopher (Shai) Genereaux, Ruby and Andria John, Joey, Conan, Kaleb (Mikayla) and Anna Gene (Rob) Barrientoz, James and Rebekah Miller; 17 great-grandchildren and one great-great-grandchild. Also surviving are a brother, Norman Ogemaw; a sister, Rose Kutchey; and many nieces, nephews and community youths that lovingly called her Grandma Ruby.
She was preceded in death by her mother and father; by her husband, James Ward; a son and daughter, Daniel and Linda Perry; and siblings, Gilbert, Juanita, Geneva, Joan and Beula.
Visitation is taking place today, Jan. 28, at the Northport Indian Mission Church, with a wake service to be held at 7 p.m. and continuing visitation until the time of the service at 1 p.m. Wednesday, Jan. 29. Pastor Wava Hofmann will officiate the service and Pastor Sam McClellan will lead the services on Tuesday.
Memorial contributions may be directed to Ruby's family in care of Reynolds-Jonkhoff Funeral Home, 305 Sixth St., Traverse City, MI 49684.
Please share your memories of Ruby with her family by visiting her online tribute page at www.reynolds-jonkhoff.com.
The family is being cared for by Reynolds-Jonkhoff Funeral Home and Cremation Services.
Published on January 28, 2020
To send flowers to the family of Ruby Ogemagegedo, please visit Tribute Store.

Send flowers
in memory of Ruby

A place to share condolences and memories.
The guestbook expires on April 26, 2020.