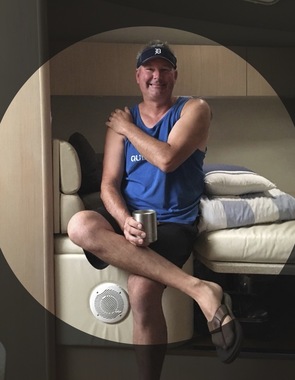 Back to Thomas's story

Thomas Thaddeus "TK" Kunnath, born April 12, 1965, passed away Jan. 28, 2020 after a courageous battle with brain cancer.
He is survived by his wife, Joanie (Mack) Kunnath; his dog, Bu Bu; brother, Glenn (Dana) Kunnath; nephew, Maxwell; niece, Addison; mother-in-law, Esther Mack; sister-in-law, Sue (Blake) Vance; nephews, Brady and Mackenzie; niece, Lily; sister-in-law, Nan (Mark) Dancer; nephews, Spencer and Mickey; and endless friends who will miss him dearly.
He was predeceased by his parents, Thomas and Barbara; and father-in-law, Tom Mack.
TK and Joanie met in 1988 and married on Nov. 3, 1990. Residing in Traverse City, they also enjoyed many trips to Hawaii and to their condo in Mexico throughout their marriage.
Ted, or TK as most called him, was a man who marched to his own beat. His love for boating and boating friends was a highlight of his summers. Although his docking was not his strong suit you could always depend on him to be sitting on the back of his boat ready to offer you a drink, conversation or music and dancing. He was the best heckler. Anyone was fair game, but his humor was purely out of love. His laugh was contagious, and if you had the pleasure to spend time with him, many hours of laughter always entailed.
He ran a successful contracting company, TK Builders, for over 25 years, and loved what he did. TK was willing to help with anything even if that meant being the supervisor and telling you what you should be doing.
Until the very end, TK maintained a positive and strong outlook. He would pass that onto anyone who visited, other patients, doctors, nurses and other staff. His huge smile, hazel eyes and bear hugs will be greatly missed.
Published on February 4, 2020
To send flowers to the family of Thomas Thaddeus Kunnath, please visit Tribute Store.

Send flowers
in memory of Thomas

A place to share condolences and memories.
The guestbook expires on May 03, 2020.

Linda Costa
Very sorry and sad to hear of Teddy’s passing ,
Joanie.
Chrissy Cairns
Joanie, I’m heartbroken for you. I’m so sorry for your loss. TK’s friendship with my family was such a blessing, as is yours. All the kindness, smiles, laughs, hugs and “hellos” on the dock will be greatly missed. May he Rest In Peace. I’m sending you strength, my friend, and so much love!
Cindy Ockert

Beautiful in Blue was purchased for the family of Thomas Thaddeus Kunnath by Cindy Ockert.  Send flowers

Kam Culbertson
Ted will be missed greatly, he was so fun to work with, always had smile in his shorts and flip flops on every job we did together.
Kathy Zipser (Good)
So many great memories of Ted. I was so lucky to know him! Joni, my heart goes out to you with love and hugs at this difficult time. I will be thinking of you and sending lots of prayers and peace moving forward. Love you-
Kathy
Trish Wiltse
Joanie, my heart goes out to you. I’m sorry for your loss. Prayers for you and your family and all your friends. TK will be missed
Bobby and Cheri Arciniega
TK we will never forget all the great memories on your boat, the tips to Mexico and fun times spent eating great meals especially your homemade pizzas. You will be surely missed. Joanie our hearts are saddened for you your family. Prayers for your comfort and peace.
Wade Mariage
Joanie, I am so sorry for your loss. I always enjoyed TK coming into K-Wall to get estimates, or just to talk with us. I can even remember the first job I bid for him, a remodel on Apple Ridge. Probably around 2001-2002? He will be missed for sure.
Heidi Musser
Joanie,
I am so sorry for your loss!!!!
Heidi(Cherry Central)
polly & tim cairns
Will miss seeing TK's smile and hearing his laughter. Big smile & a big heart :)
View all