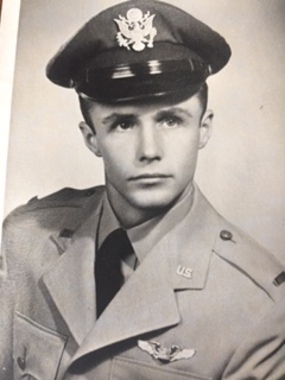 Back to Walter's story

Walter Louis Walker was born Aug. 19, 1932, in Alpena, to James and Dora (Thorne) Walker.
He was raised in Detroit along with his two brothers, Jim (Jeanette) and Tom (Linda); and sister, Rosemary (Dennis Hawhee) and remained close to his family throughout his life.
Walt made many lifelong friendships during his school years. He attended Guardian Angels Elementary School, De La Salle and Denby High School. He graduated from Wayne State University with a bachelor's degree in business and joined the TARA Fraternity. After graduating from Wayne State, he served two years as a navigator in the United States Air Force in Texas, then four years as a captain in the Michigan Air National Guard flying in B-25 and F-89 Scorpion Fighters.
Walt worked for General Motors at the Technical Center in Warren for 38 years and became director of the Color Studio overseeing the design of interior fabrics and exterior paints for all GM vehicles.
He married Nancy Margaret Harrington on Dec. 28, 1957 in Charlotte. Together they raised four children. Walt was a devoted Dad, coach, fan and a long standing member of the Shrine Dads Club.
Walt and Nancy were married 29 years when she passed away in 1986 from cancer. Several years later a reunion of an old neighborhood bridge club brought Walter and Charlette Carlson, also recently widowed, together again. These two former Royal Oak neighbors fell in love and were married Dec. 29 1993.
They enjoyed extensive travel together including European destinations, the United Kingdom and China. They enjoyed ski trips out west and up north. Walt and Charlette lived in Clarkston for many years before relocating to Traverse City in 2003, and the past four years in Elk Rapids.
Becoming "up north residents" they enjoyed all the area had to offer in the company of dear old friends and met new ones through the Newcomers, including a jazz appreciation group they became part of. Walter and Charlette were volunteers with the Father Fred Foundation and enjoyed time with their combined six children, twelve grandchildren and extended family.
Walt's battle with cancer ended at home Dec. 31, 2019 surrounded by love; he was 87. Much grace was brought to his end of life journey with the compassionate assistance of Hospice of Michigan.
Walt is survived by his wife, Charlette Walker; children, Tom (Mary Beth), Matt (Clare), Julie (Chris Cameron), Anne (Karl Pfendt), Carey Carlson Clauss (Bernard), Claudia (Jim Keglovitz); and grandchildren, Sarah, Kirsten, Justin, Jack, Andrew, James, Clare, Libby, Nancy, Katherine, Michael and Clay. He was a loving, kind and gentle man and will be greatly missed.
Published on January 14, 2020
To send flowers to the family of Walter Louis Walker, please visit Tribute Store.

Send flowers
in memory of Walter

A place to share condolences and memories.
The guestbook expires on April 12, 2020.

Tina Lemley
Walt was a very special person. I became friends with him and his wife, Charlette through the Newcomers group and our Jazz Appreciation Club that we were members of for over 20 years. He was a funny, sweet and charming man with a great sense of humor and a great knowledge of Jazz. And he will be greatly missed! God's Blessings to His wife Charlette and their family.
With Much Love, Your Friend - Tina Lemley
Judy Matheisz
Although I personally did not know Mr. Walker, our family has the pleasure of having his daughter, Annie, as part of our family. Annie is the daughter-in-law of my sister Eva. He raised a wonder, loving , warm hearted angel. That is a testament to his loving and wise parenting. We extend our sincere condolence to all the family for the passing of this fine gentleman. With sympathy, Judy & Peter Matheisz
Bonnie Chapman
He was principled, kind and generous. It was said that if you wanted a job done right, give it to Walter to do. So, in spite of my bluster that I could do it, he took over the packing of a 14 cubic foot moving van, filling it to the brim with my stuff as I moved back to Canada. I couldn’t have done it. He was an expert packer. It was amazing what he did and I don’t know if I ever thanked him enough. What a gentleman would do for a lady!
Bonnie Chapman

A memorial tree was planted in memory of Walter Louis Walker.  Plant a tree

Louis Madonna, partner of Bonnie
It was my privilege to meet Walter, a gentleman through and through, a generous and thoughtful man. He will be missed.
View all